In one of the rooms in the hip-hop culture house engraved on the walls” Is a live account of the 1 Super Soul Sista, who has the blessing to be dubbed “the Angela Davis of hip-hop”. Starting off MCing as a 16- year old pop-locker, Medusa continues to cultivate hip-hop seeds in South Central and across across the country in unprecedented numbers.

You will find no other who will bring it to you like this, someone’s music that makes you feel strong, proud, and encourages with the manner of ONE Love. “Coming up in the LA scene, she honed her skills” At the Good Life café and Leimert Park’s “Project Blowed” Workshop, around Freestyle Fellowship, Black Eye Peas, Macy Grey, and Xzibit, being the first in the LA hip hop scene with a live band. After blessing her already growing fans with her EP, “Do It The Way You Feel It”, Medusa gained an even stronger fan base overseas, in the country, on college campuses across the nation, and has virtually become a guru to the underground hip-hop scene and artistic community.

She is respected and adored as a Queen to the word and power of her music and what she stands for, not just the fact that she’s the undisputed Queen of West Coast underground hip-hop."
Updated info & links:
Medusa the Queen of LA underground, has been highlighted In film director Ava Duvernay's documentary "This is the life".  As well as hip hop documentary "freestyle". Some of her ASCAP credits have been earned with Tupac Shakur in Gridlocked sound track, Tina Marie's Macking game, featuring Medusa and MC lyte and with Speech of Arrested Development's solo album Spiritual people, their single went gold in Japan. Medusa is not only known as MC poet and singer but also an actress. Showing her recent skills in CBS all access series One Dollar as Etta, starring John Carroll Lynch also In frequently ran episode "run Moesha run" as poet lady lunatic. And HBO'S cult prison classic directed by Cheryl Dunye "Stranger inside" as prisoner Leisha the hiphop geisha. Medusa the gangsta goddess is also a motivational speaker Which has earned her the honor of her image on the entrance of the hip hop archive department at Harvard. With her uncanny experience in hip hop she is considered a professor, a title which has her as one of the heads of the hip hop department at Cal arts and teaching in El Salvador for Dizzy Gillespie's government program "next level".  As far as live performances she has shared the stage with De La Soul, Krs1, Eryka Badu, Common, Lil Boosie, freestyle fellowship,the Ohio players and many more. Now you truly have insight on MC, singer, poet, motivational speaker, actress, writer and  Professor, Medusa the gangstagoddess . IG @legendmedusa medusathegangstagoddess.com , Enjoy her new singles that are a must hear & see. "Catch yo feelings" https://youtu.be/Dp-Hu2fC4j8 "Pocket" feat. Patrick Antonian https://youtu.be/3lc9LF4ZlSY "On da one" off her "whr's the DJ booth" album https://youtu.be/jsSlUQkNM_Q
MEDUSA PRESS: actually recorded "This P*ssy's A Gangsta" and I heard it out the studio and dude, I sh*t you know, the game is completely over. Every femcee needs to go the hell home after that ish. Medusa and Soleternity??!? It's over. Completely over. Hang up all mics and go home." - BlackSoultan, Youtube.com NonstopLAB

"Breakdown FM w/ Davey D sat down with Medusa, who many of you as part of the legendary pioneering group Feline Science. This Godmother of west coast Hip Hop took us down memory lane.." - Davey D, 109.7 FM Break Down (Thuglifearmy.com) (Mar 27, 2008)

"We booked her and then framed the theme of the event around her," said Xian. "The things she says speak toward equity and equality between the sexes." You've got gangsta (rap) and you've got a large suppression of female voices. And then you have Medusa. And she's just this Africana queen." - Honolulu Advertiser

"WHEN A QUEEN STEPS TO THE MICROPHONE all she wants from you is silence," raps Los Angeles underground hip-hop artist Medusa. With her profound lyrics and looks" - Raber, Erin, Curve

"Medusa also broke down the challenges one faces doing the independent hustle. She feels the grind is necessary but a good thing in the end. The trick to being successful is to be consistent." - Davey D, 109.7 Break Down FM

"Mone *Medusa* Smith is a powerful and eloquent speaker. She is requested on numerous occasions to share her knowledge, wisdom, and true heart expressions at symposiums and speaking engagements for colleges, organizations, churches, and summits. - Badru, Project Blowed

"anybody who is an aspiring artist as well as to those who have been around the block a few times.My heartfelt advice to you is as follows; If you happen to be booked for a show and the promoter has you coming on AFTER this LA based artist named Medusa... DO NOT DO IT. - Reheim Shabazz, TheIndustryCosign.com

"Have your manager re-negotiate your contract, but do not go on stage right after her. If you are a battle emcee who has won a few contests and you're feeling good about yourself and your looking for new challenges-Be warned! DO NOT set your sites on Medusa." - Rehiem Shabazz, TheindustryCosign.com

"Don't let your homies or an over ambitious promoter set you up. If you find yourself on the bill the best thing for you to do is call in sick. Go on vacation.. leave the building.She will cause you extreme embarrassment and is likely to end your career if its in front of a large crowd." - Reheim Shabazz, TheindustryCosign.com

"Where do you fall in the Hip-Hop Is Dead argument? I think when they say hip-hop is dead, they mean a certain attitude that was in hip-hop. Hip-hop is running things.I go back to that thing of hip-hop being Human Beings Harboring Opinions of Politics and Propaganda.That was hip-hop." - Ernest Hardy, LA Weekly

HBO FILM STRANGER INSIDE - MEDUSA PLAYED THE ROLE OF A "WONNA BE" RAPPER NAME "LEISHA"  WHO CAN'T SEEM TO STAY OUT OF TROUBLE.

MEDUSA KNOWN AROUND THE WORLD AS A KEY STAPLE IN THE ADVANCEMENT OF HIP HOP AND HAS BEEN RECONIZED IN SERVAL DOCUMENERIES LIKE THE VERY POPULAR "FREESTYLE:THE STORY OF RHYME" AND "THIS IS LIFE"

MEDUSA'S CAN ALSO BE SEEN IN CBS ALLACCESS HIT TV SHOW "ONE DOLLAR" SHE PLAY A CLEVER FOSTER MOM IN A SMALL FACTORY BLUE COLLAR TOWN. 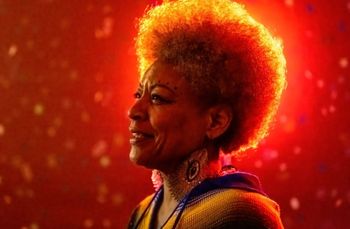 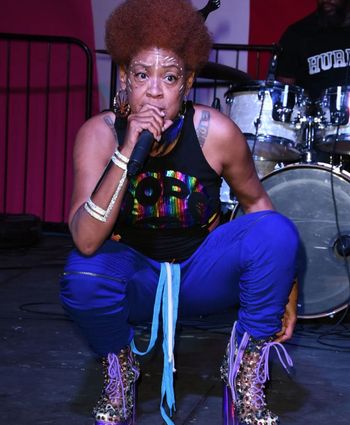 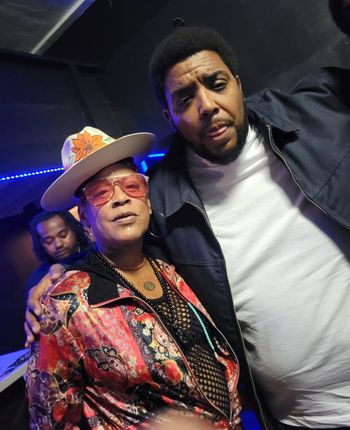 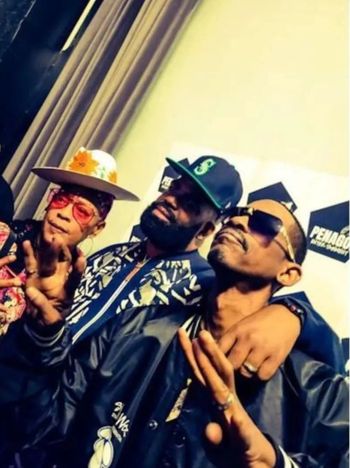 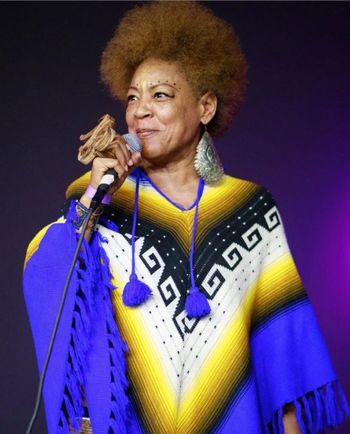 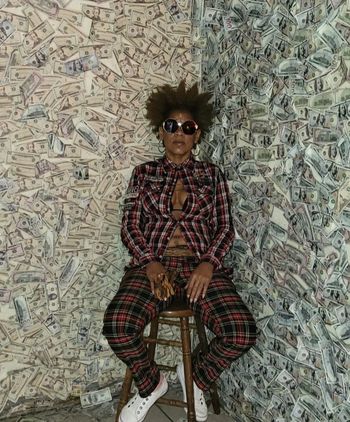 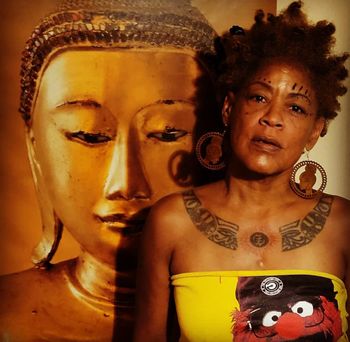 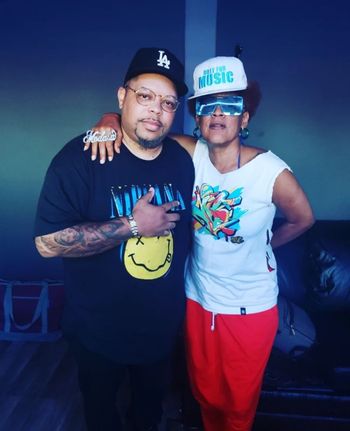 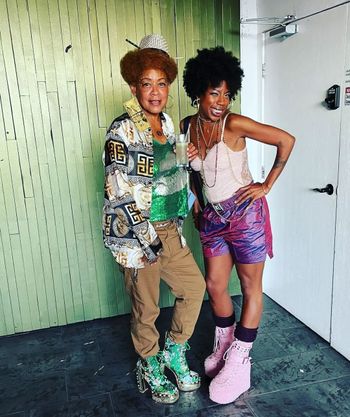 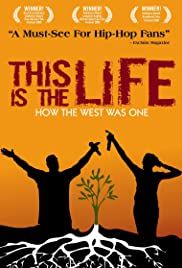 THIS IS LIFE: HOW THE WEST WAS ONE - FEA. MEDUSA

STILL CLIP FROM STRANGER INSIDE FILM - FEA. MEDUSA AS "LEISHA" 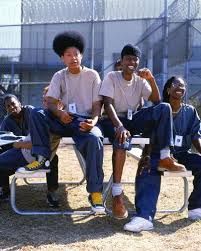 SCENE FROM HBO'S FROM STRANGER INSIDE FEA. MEDUSA AS "LEISHA" 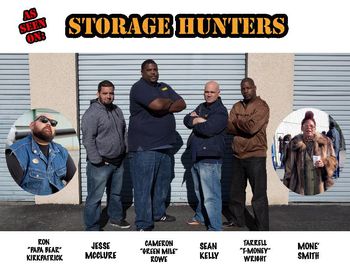